Knowledge base
About us
Blog
Courses
Member login
Join The Padel School+
In this article
Table of contents
[[showindex]]
Articles in this category
Hitting Flat
What padel level do I have?
Best way to improve your padel level
Things to do when new to padel
Playing with lower level players
Padel training in the winter
Weather affecting padel
Consistency is king in padel
[...]
Home
The Padel School knowledge base
Padel tips & tricks
What padel level do I have?

What padel level do I have?

How do I know which padel category I am in?

Why Use A Padel Category?

Before we open a can of worms, let’s just agree why we put players of different levels into a padel category! The main reason is so that players can have a challenging and competitive game with players of a similar ability. Padel is not necessarily like other sports where a slight difference in level disrupts the game, but a significant difference in level would. The idea is to create more fun for players by making their matches competitive.

Countries that are relatively new to padel most likely do not have an advanced tournament/ranking point structure. So they rely on grouping players into categories and these groups are used for tournaments, leagues, friendly match making etc.

What are Padel Categories?

In different locations, there might be variations of the system, but essentially players are grouped according to their capability to play the sport and compete. Often it starts with basic A, B, C and then as numbers increase there become more demands for B+ or C+ as people realise playing level is a spectrum. Even if different countries have different systems, as long as it works for the padel community in that area then that’s the main thing. 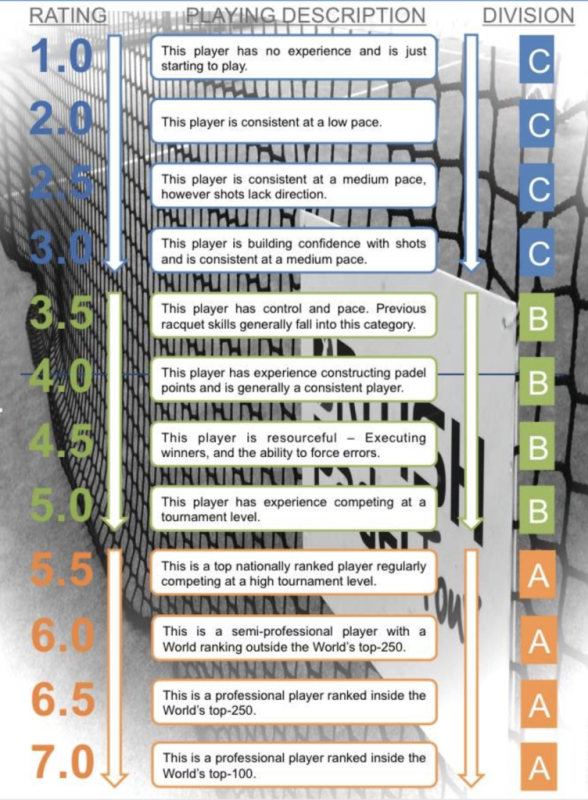 Who chooses your Padel Category?

Potentially one of my favourite questions! Having organised literally hundreds of padel tournaments, I do not think I have ever finished a tournament without somebody claiming there was a mismatch in the category (either themselves or another player).

It is usually the responsibility of the player to choose their category (often with the assistance of the club coach if necessary). But it is in the advantage of both the players and the organisers that you select your category as accurately and objectively as possible. You will play better matches, your opponents will have better matches and spectators will watch better matches! 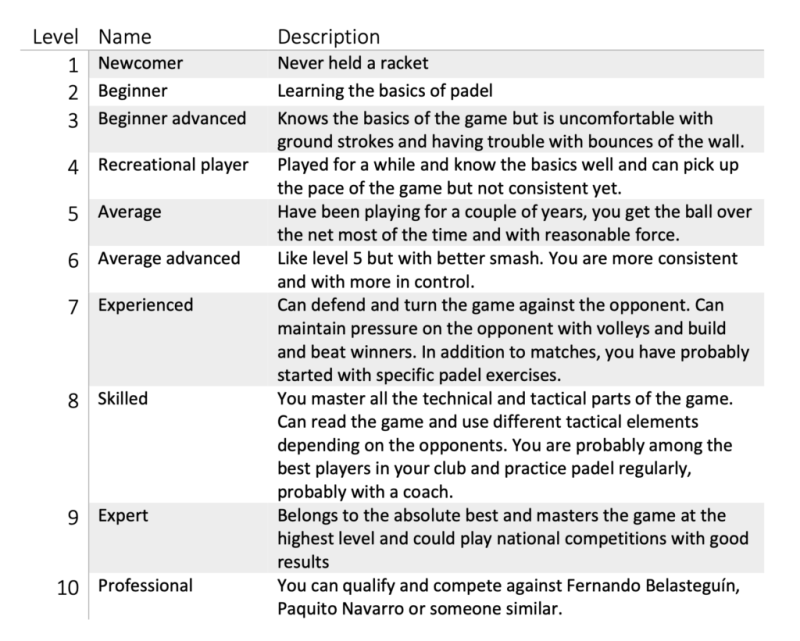 The same applies for choosing your partner! Many players ask partners who are categories above them (don’t often see asking players below) so that they can win their section. But again, this does not help you! I have seen this time and time again – the better player plays the majority of the padel, against the lower level opponents. So as a team the better player is not improving their game because they are playing in too easy a category for them and the lower level player is not improving their game because their partner is hitting half the balls meant for them.

The best way to do this is to play some local tournaments and if you are winning regularly beating opponents at a certain category challenge yourself by playing a higher level. I would say you need a minimum of 2-3 tournaments at a higher level to know if that’s right for you. Don’t just go on the results from one tournament, you could be lucky or unlucky in a draw. It is quite simple, if you are winning matches easily you should increase your level and if you are losing matches easily then decrease your level. Notice “matches” and not a match…

Eventually, most countries will adopt a more inclusive ranking system, particularly in the higher categories. So there will be open tournaments, and should players choose to compete, they could be playing good players in the first round. But that’s all part of padel, and sport in general. You do not hear the qualifier in Wimbledon complaining they have to play Roger Federer first round, it should be a pleasure to challenge yourself against better players and see how you are doing!

So if you are 1 of the 250 players that are competing in the tournament I am organizing in a couple of weeks, please do not get worked up about who is in which category. Enter the level that is best for you with a partner of a similar level and, most importantly, enjoy your games!

…oh and spare a thought for the organizer who is fielding questions about categories from the moment the tournament is promoted! haha